Kelsea Glynn is the Queen of the Tearling. Despite her youth, she has quickly asserted herself as a fair, just and powerful ruler.

However, power is a double-edged sword, and small actions can have grave consequences. In trying to do what is right – stopping a vile trade in humankind – Kelsea has crossed the Red Queen, a ruthless monarch whose rule is bound with dark magic and the spilling of blood. The Red Queen’s armies are poised to invade the Tearling, and it seems nothing can stop them.

Yet there was a time before the Crossing, and there Kelsea finds a strange and possibly dangerous ally, someone who might hold the key to the fate of the Tearling, and indeed to Kelsea’s own soul. But time is running out…

Erika Johansen’s fierce and unforgettable young heroine returns in this dazzling new novel of magic and adventure, set in the beguiling world of the Tearling.

This is why I’m thankful for not giving up on a series so easily. The Queen of the Tearling was a bit disappointing but this book is a huge improvement. The first book might be annoying for it’s lack of much needed explanations, but it actually served as a good foundation for this installment. There were still some subtle issues that I found along the way but I think this series has gone into a surprisingly unique and interesting direction. One that had me engrossed and left me wanting to know more about the world, the magic, the mysteries, and the characters’ fate.

Invasion of the Tearling feels like reading two different books about two different worlds—Kelsea’s and Lily’s. It’s like two treats in one. On one side we have a medieval-like world that faces war and is bound to lose everything. On the other we have a world rich in technology but is losing humanity. It’s good that the world-building has finally started to make a solid shape in this book and light has been shed on the whys and the hows that I had in book one. Not just intriguing, these worlds are also quite surprising. In fact, this is the first time I see the modern world of technology collide with the world of fantasy and magic. And it actually worked! It was confusing as hell at first, and I even thought the first book was ridiculous, but now it all made sense. I didn’t thought I was going to say this, but man, this is actually a great idea!

Always, we think we know what courage means. If I were called upon, we say, I will answer the call. I would not hesitate. Until the moment is upon us, and then we realize that the demands of true courage are very different from what we had envisioned, long ago on that bright morning when we felt brave.

This installment has got a bunch of whole new characters that will burn through your brains. The plot thickens as we were introduced to a new protagonist—Lily Mayhew. Lily’s POV kind of made the beginning of this book a little confusing for me because she takes us to a world that’s entirely different from Kelsea’s. And I couldn’t make the connection between her and what’s currently going on in Tearling. But when it all clicked into place it actually answers many of my questions from the first book.

Lily is living in a sexist world. There’s a mention of women being executed for defying their husbands. Male babies were valued more than females. It seemed that the women’s only role in this world is to give their husband a son. It doesn’t even matter if they want to get pregnant or not. There are graphic descriptions of rape, violence, torture, and abuse in Lily’s part of the story that could make readers uncomfortable. So I think I should issue the trigger warnings.

“Corruption begins with a single moment of weakness.”

Kelsea was my least favorite character in the first book. But here she’d gone through a huge character development and I’m loving this Kelsea. She might not be a skilled fighter but her strength lies in making plans and strategizing. And that’s pretty badass too. I also appreciate her being decisive. And the way she stands firmly with her decisions is remarkable. I’m loving the part where she took a little walk to the dark side. I love her strong will to stay in the right path when she could have succumb to the enormous power she recently discovered and rule like the Red Queen.

Even the small gestures of kindness have the potential to reap enormous rewards. Only the shortsighted man believes otherwise.

The side characters were also more fleshed-out in this book compared to the previous one. I guess the multiple POV’s helped a lot in that. We saw the vulnerable side of Lazarus and the unexpected strength in Father Tyler. Thankfully the Queens Guards had improved too. Gone were the guards who had so little faith in Kelsea because they only see her as a child bound to get killed the moment she sits on the throne. They’ve become the friends and trusted advisors that Kelsea needed.

There were good improvements on the villains too, particularly the Red Queen. We’re starting to see how powerful she is and what makes her weak. She’s no longer holed up in her castle. This time she’s out to see the deed done and to finish what she started.

Love was a real thing, Aisa thought, but secondary. Certainly love was not as real as her sword.

There’s very minimal romance in this series but I was still surprised with how things turned out in that department. I was almost sure I knew who’s going to be Kelsea’s love interest from book one. Then the author brought someone up front—someone who’s been on the background the whole time—and says, “Here’s our love interest, folks!.” It was unexpected but okay.

Still the best thing about this book is getting answers about the crossing—how it happened, why it happened, when it happened. Given that ending, I quite expect the third book to be even more cracking. But while I love this book, I don’t think I could recommend this to everyone. This book contains gruesome details about violence and sexual assault. Also some scenes that involve self-harm. I wouldn’t recommend this book to those who are sensitive to these topics and definitely not to children. But if you’re looking for an adult book with a touch of unique, you can try this series. 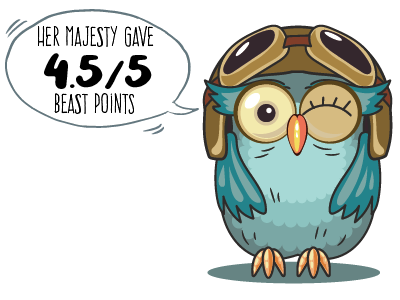 4 thoughts on “Review | The Invasion of the Tearling”