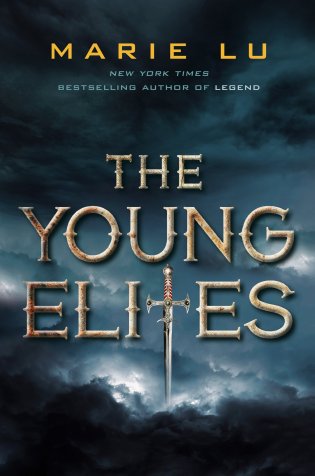 Adelina Amouteru is a survivor of the blood fever. A decade ago, the deadly illness swept through her nation. Most of the infected perished, while many of the children who survived were left with strange markings. Adelina’s black hair turned silver, her lashes went pale, and now she has only a jagged scar where her left eye once was. Her cruel father believes she is a malfetto, an abomination, ruining their family’s good name and standing in the way of their fortune. But some of the fever’s survivors are rumored to possess more than just scars—they are believed to have mysterious and powerful gifts, and though their identities remain secret, they have come to be called the Young Elites.

Teren Santoro works for the king. As Leader of the Inquisition Axis, it is his job to seek out the Young Elites, to destroy them before they destroy the nation. He believes the Young Elites to be dangerous and vengeful, but it’s Teren who may possess the darkest secret of all.

Enzo Valenciano is a member of the Dagger Society. This secret sect of Young Elites seeks out others like them before the Inquisition Axis can. But when the Daggers find Adelina, they discover someone with powers like they’ve never seen.

Adelina wants to believe Enzo is on her side, and that Teren is the true enemy. But the lives of these three will collide in unexpected ways, as each fights a very different and personal battle. But of one thing they are all certain: Adelina has abilities that shouldn’t belong in this world. A vengeful blackness in her heart. And a desire to destroy all who dare to cross her.

Here’s a confession. I don’t have a big shelf. So when a book doesn’t live up to my expectations I get rid of them by selling them off at half their original price. Why keep a book that I don’t intend to reread when I could pass it to others who might actually love it? But this book? This book has earned it’s place in my shelf and it’s definitely not leaving any time soon.

Everyone has darkness inside them, however hidden.

The Young Elites is one of the darkest book I’ve ever come across. There is a sense of honesty in the pain, the struggles, and the hate that emanates from the characters. It felt real and palpable. The plot held my attention all the way through. It’s very original and it rolled out in such a striking way—from the blood fever that killed thousands, to the idea of malfettos who are disowned by their families and hated by society because of the strange, inexplicable, powers they acquired after coming out of the blood-fever alive. Malfettos are seen as abomination and are unjustly executed because of it. But a few of them choose to fight back and they call themselves the Young Elites.

Some hate us, think us outlaws to hang at the gallows.
Some fear us, think demons to burn at the stake.
Some worship us, think us children of the gods.
But all know us.

I’ve always been fascinated by the idea of a small band of misfits that fights together for a common goal and treats each other as family. So the Dagger Society—a small group of Elites that fights for a malfetto-friendly world—is one strong pulling factor for me. Each of the members’ powers are unique and interesting. What I love most about this group are the beautiful threads that ties each member together. Of course there’s the thread of their shared cause. But more than that there’s the thread of friendship, trust, loyalty, respect, and the sense of belongingness in a group that accepts them for what they are.

I am Adelina Amouteru… I belong to no one. On this night, I swear to you that I will rise above everything you’ve ever taught me. I will become a force that this world has never known. I will come into such power that none will dare hurt me again.

Adelina Amouteru is not your usual main character. Instead of the typical just and virtuous hero, Adelina is more of a reflection of that dark spot present in all of us. She’s a very complex character made cold and cruel by years of being hurt, betrayed, and rejected. It’s easy to find strong female leads in YA fantasy nowadays. But it’s not everyday that we see a strong female lead who is also bloodthirsty, fueled by hate, driven by her strong desire for revenge, and has a fat chance of going down the dark path of villainy. If you’re looking for a fairy tale you won’t find it here.

“Embelish your flaws. They will turn into your assets. And if you become one of us, I will teach you to wield them like an assassin wields a knife.”

I am a shameless lover of flashbacks. In this book, the flashbacks help us know Adelina to her core. We see her struggle to fit in a world that doesn’t want her, to be loved by a father who only sees her as a burden that needs to be disposed of, and we see her battling with herself and her own feelings until she slowly give in to the darkness. What I love about Adelina is that she posses this incredible power but she isn’t in control of it right off the bat. She has to work hard and spill her own blood as she trained with the Daggers before she fully discovered what she’s capable of doing with her powers. Also, her emotions were truly believable and relatable especially the love/hate she feels for her seemingly perfect sister—Violetta. She’s almost always jealous of Violetta but when push comes to shove she’ll risk her life for her sister.

To love is to be afraid. You are frightened, deathly terrified, that something will happen to those you love. Think of the possibilities. Does your heart clench with each thought? That, my friend, is love. And love enslaves us all, for you cannot have love without fear.

There is romance in this book between Adelina and the Daggers’ leader—the distant, serious, and equally dark, Enzo Valenciano. The romance held a very tiny portion of the book but it does feel delicious and a little bit more intense at some point. Enzo sounds like my ideal book boyfriend—dark and powerful, with an agenda of his own, but has goodness at his core—but I just wasn’t completely into him. Don’t get me wrong, I love Enzo. I love how he inspires his Daggers, how he protects them, how dedicated he is to their mission. I can’t quite put my finger on it but it felt like he lacks something that could have made me root for him.

Be true to yourself. But that’s something everyone says and no one means. No one wants you to be yourself. They want you to be the version of yourself that they like.

On the other side of the line is Teren Santoro, leader of the Inquisition Axis who believes that his purpose is to purge the country of malfettos. It’s easy to see him as the villain in this story. But with our protagonist spiraling towards the dark side and with the tiny glimpses of the light that’s still present inside Teren, the line that separates good and evil becomes a blur. The thing about the characters in this book is that they all made bad choices and did some evil things but instead of hating them I found myself empathizing with them.

In addition to the highly memorable characters, this book is also beautifully written. Marie Lu didn’t held back with her descriptions. It was rich and vivid which makes everything so easy to picture in my mind. The tension is always there throughout the whole thing and Lu’s writing style makes readers feel every bit of it.

I am tired of being used, hurt, and cast aside. It is my turn to use. My turn to hurt.

The big twist towards the end is what made this book unforgettable for me. It was painful, and shocking, and not at all what I expected. I actually stopped reading for hours to let what happened sink in. And when it did, my heart leaked blood! And trust Lu to make you feel the other characters’ rage, their remorse, their pain, and guilt for what happened, leaving you in a puddle of emotions too.

The Young Elites is a beautifully dark story about power, self-discovery, and vengeance. It’s an incredibly gripping and a really strong series starter. I’ll wager that things will only get darker in the next installments and I’m really excited about it. I can see this becoming one of my favorite trilogies and would happily recommend this to everyone especially the YA fantasy lovers.

7 thoughts on “Review | The Young Elites”