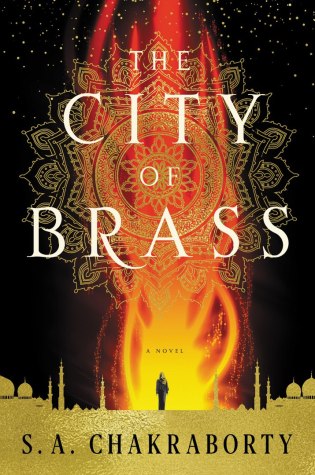 Nahri has never believed in magic. Certainly, she has power; on the streets of 18th century Cairo, she’s a con woman of unsurpassed talent. But she knows better than anyone that the trade she uses to get by—palm readings, zars, healings—are all tricks, sleights of hand, learned skills; a means to the delightful end of swindling Ottoman nobles.

But when Nahri accidentally summons an equally sly, darkly mysterious djinn warrior to her side during one of her cons, she’s forced to accept that the magical world she thought only existed in childhood stories is real. For the warrior tells her a new tale: across hot, windswept sands teeming with creatures of fire, and rivers where the mythical marid sleep; past ruins of once-magnificent human metropolises, and mountains where the circling hawks are not what they seem, lies Daevabad, the legendary city of brass?a city to which Nahri is irrevocably bound.

In that city, behind gilded brass walls laced with enchantments, behind the six gates of the six djinn tribes, old resentments are simmering. And when Nahri decides to enter this world, she learns that true power is fierce and brutal. That magic cannot shield her from the dangerous web of court politics. That even the cleverest of schemes can have deadly consequences.

After all, there is a reason they say be careful what you wish for . . .

Do you want a diverse fantasy novel that centers on djinns, ghouls, flying carpets, hidden cities, and flaming swords? One with richly detailed magical world, enthralling storyline, fearsome characters, and huge what-the-eff twists? Do you want dangerous yet good-natured love interests and a romance that has none of those eye-rolling instalove crap? Then read this book.

The first of a planned trilogy, The City of Brass didn’t just take me to a wild and perilous adventure. It had me deeply enmeshed in all its intricacies and intrigues. I’m mesmerized by its beautiful yet deadly world, its people, and their colorful culture. Although there were some confusing parts regarding Daevabad history—I had to practically draw a diagram just to keep track of who came from what clan, who wants to kill who, and who’s allied with who—it’s easy to lose yourself in the complexity and the lushness of Chakraborty’s world. Aside from the different sects fighting for power in Daevabad, there’s also the outsiders like the marids, the peri, the rukh, and other menacing new-to-me creatures that added wonder to the story and threat to our protagonists’ lives. A lot of foreign terms are used freely throughout the book. Thankfully, it has a helpful glossary at the back.

The story is told from two POVs that lets us see Daevabad from different angles. One from Nahri, who didn’t have any knowledge of Daevabad’s existence for most of her life. And another from Ali, who knows the city so well. Nahri is a con from Cairo who turned out to be the last descendant of the Nahid bloodline—the former rulers of Daevabad. She didn’t know of her parentage until she unintentionally summoned a Daeva warrior—Dara—sworn to protect the Nahids. Nahri’s POV is where we get the wonder as she sees the magical city of her ancestors for the first time. It’s also where we get most of the adventure as she and Dara fights to escape every creature that wants to wipe out the last of the Nahid blood. It was easy to love Nahri. It’s not just her funny and clever remarks. It’s her solid determination to learn and harness her power. Despite having a powerful bloodline running through her veins everything didn’t come easy for her. She failed countless times. She’s being denied proper training—a strategy to keep her from reaching her full potential—but it didn’t stop her from learning.

In Ali’s POV, we see more of the city’s intricate history, the political strife within, the division of its tribes, the oppression, and the rising rebellion. It’s a little difficult for me to connect with Ali’s character. He’s too naïve for my taste and sometimes he got this holier-than-thou attitude. It took a huge chunk of the book before I started liking him. Still I’m not cheering for him as much as I cheer for Dara—this sad, angry, and misunderstood Daeva with a dark past. My experience with djinns is limited to Alladin and his magic lamp, where they would grant three almost harmless wishes. Chakraborty’s depiction of wish-granting djinns in this book is far more darker and disturbing. The djinns were enslaved, helpless, under their human masters’ wishes which often involves a lot of killing.

Thankfully, this book is not all blood and war and backstabbing—although there’s plenty of those . There’s romance. And it’s a good one. And the banters are quite entertaining, just enough to lift the darkness every once in a while. It’s one thing I love about this book—the balance between magic, political intrigues, adventure, and romance. There wasn’t too much romance that could make the story cheesy. The schemes and plots are just the right amount to make you turn a page more—or read one more chapter. It isn’t all doom and gloom.

The twists and turns are jaw-dropping because of how unexpected they all are, of how unsuspecting I was. None of the twists felt convenient. The revelations were an excellent additional weight laid-out for the next installment. And that game-changer ending is sure to make readers eager to get their hands on the second book.

For those like me who know so little about Middle Eastern folklore and wants to read more books like Alladin or A Thousand and One Nights, this book would be a good start. It’s a dangerous and mesmerizing tale, gorgeously written, and delivered in such a satisfying way. But more than that, it shows a vivid picture of a beautiful culture and tradition that I rarely see in my books. Needless to say, I find this delightful and highly recommended.

4 thoughts on “Review | The City of Brass”