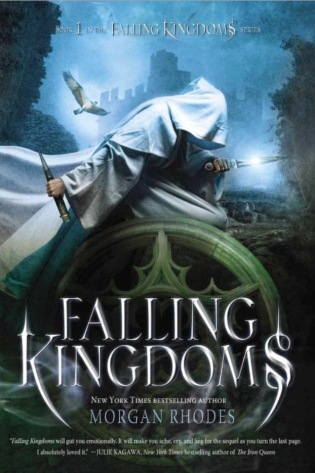 In the three kingdoms of Mytica, magic has long been forgotten. And while hard-won peace has reigned for centuries, a deadly unrest now simmers below the surface.

As the rulers of each kingdom grapple for power, the lives of their subjects are brutally transformed… and four key players, royals and rebels alike, find their fates forever intertwined. Cleo, Jonas, Lucia, and Magnus are caught in a dizzying world of treacherous betrayals, shocking murders, secret alliances, and even unforeseen love.

The only outcome that’s certain is that kingdoms will fall. Who will emerge triumphant when all they know has collapsed?

It’s the eve of war…. Choose your side.

Princess: Raised in pampered luxury, Cleo must now embark on a rough and treacherous journey into enemy territory in search of magic long thought extinct.

Rebel: Jonas, enraged at injustice, lashes out against the forces of oppression that have kept his country cruelly impoverished. To his shock, he finds himself the leader of a people’s revolution centuries in the making.

Sorceress: Lucia, adopted at birth into the royal family, discovers the truth about her past—and the supernatural legacy she is destined to wield.

Heir: Bred for aggression and trained to conquer, firstborn son Magnus begins to realize that the heart can be more lethal than the sword…

For years I’ve been excited to start this highly popular series because of its said similarities to Game of Thrones. And now finally… finally I have my copy and, oh boy, how disappointed I was! Sure, it has some bloodthirsty and power-hungry characters, a war between realms, brutal deaths, and incestuous relationship, but it pales in comparison to Game of Thrones. There was enough interesting magic, and strange prophesies, and shape-shifting Watchers to save this book from a one star rating. But the characters—which occupies a huge portion of my criteria next to enjoyability—were just so dull, and stupid, and simply forgettable.

I’m going to start ranting now. There may be spoilers ahead so if you haven’t started with this series yet, read at your own risk.

The book follows four POVs: the Limerian prince—Magnus, his sister—Princess Lucia, a Paelsian wine seller’s son—Jonas, and the Auranian princess—Cleiona. They were all humming with potential. Like, they could be great if only they weren’t written so poorly. All of them lacks the much needed character complexity. And they really should stop being so obvious with their actions because it’s making every plot twist so damn predictable. You can see the twists coming from miles away!

“Follow your heart wherever it leads. Appreciate life, Cleo. It’s a gift that can be stolen at any time.”

I didn’t like any of the characters. Certainly not Cleo—she’s naïve bordering on dumb. Seriously? A princess who can’t even lift a sword properly, insists on going to an enemy territory—where everyone pretty much wanted her dead—without a guard and expect to come back alive and well and successful with her mission? Oh, well, I think it’s not that hard when you expect someone—your hero—to save you again and again because why not, he’d saved you before. Real damsel in distress, Cleo. Also, every princess who has plans of vengeance after her father was murdered, her people slaughtered, her home invaded, her kingdom conquered, would have run far away at the tiniest chance of escape. But not Cleo, no. She did not want to get caught. But instead of running for her life, she chose to stand in an effing courtyard listening to her enemy deliver a speech!

Then there’s Prince Magnus of Limeria. Tall, broody, intimidating, has a tendency of a villain but actually has a good heart deep down. Now, this is the kind of character that would normally make me so interested in a book. I’m a sucker for this kind of character—cliché be damned. But I didn’t, even for one second, like or care or connect with Magnus. The darkness that wraps him like a halo is suppose to make him mysterious but really, he’s not. The other characters might not be aware of Magnus’ deepest secret—his obsession with her sister, Lucia—but it was out in the open for the readers since early in the book. And really, a couple of people already knows his secret even before he opened his mouth. So, yep, forget I even said mysterious.

Princess Lucia is but a beautiful puppet. What do we know about her except that her beauty is astounding, she’s got a long list of suitors, her brother Magnus who isn’t really her brother by blood is secretly in love with her? And oh, she’s a sorceress and she’s the key to finding the Kindred—the ultimate source of magic that had been lost for a thousand years. Lucia is practically oozing with potential here. It’s sad to see her character reduced into a mere pawn. Aside from discovering her magic, there was really no further character development on her part.

Jonas might be the only thinking head among the four. He’s a bit impulsive and quick to anger but he is capable to listening to a sound advice. The reason why he didn’t reach my standard is that he didn’t have to work hard enough to get the things he wanted. Need an audience with the Paelsian Chief? Sure. Here’s his daughter that you can use to get to him. She’s dangerous, not to be messed with or underestimated, but she can vanish out of thin air after she served her purpose. Need help in fighting against Auranos? Worry not, the Limerian king has already suddenly offered an alliance. See? The solution to Jonas’ problems just conveniently pops-up without him having to work for it. It kind of kills the chance for him to be a really strong character. And I did not like that. I’m the kind of reader who values a character’s every effort to carry out their plans. Make them suffer. Make them bleed. Make them sacrifice something. I know I sound sadistic right now, but hey, you said Game of Thrones YA version.

“Even in the darkest and mist cruel person, there is still a kernel of good. And within the most perfect champion, there is also darkness. The question is, will one give to the dark or the light? It’s something we decide with every choice we make, every day that we exist. What might not be evil to you could be evil to someone else. Knowing this makes us powerful even without magic.”

If the main characters are pathetic, the secondary characters are laughable. I’ve never seen such a dumb leader as Chief Basilius. What kind of leader doesn’t even have the tiniest suspicion against a power-hungry king in a world where everyone craved for power and authority over others, and in a time of great political unrest?

Also, this book wasn’t very original. We have our usual guy falling in love with his best friend, a royal guard falling in love with the royalty he’s guarding, a drunken lord whose sole purpose is to be a dickhead, a bitch witch, a controlling father. Throw them into a world where dying magic is in the verge of coming back and we have a plot like any other fantasy series.

“Sometimes you don’t realize how strong you are until you’re tested.”

There is romance in this book albeit a lame one. I didn’t quite believe the love between Cleo and her personal guard, Theon. It was definitely an instalove. But worse than that, it’s lousily and sloppily done. They fell in love as quickly as saying “I feel something about you” and “I feel something about you too” and just like that their feelings intensified from zero to a hundred in a snap. It wasn’t believable. At all. And you know what’s even lamer than that? The world-building! I won’t even bother to talk about how dull it was.

As I’ve said, I saw potential in the characters. Maybe it gets better with the next books? Maybe there will be some massive character development? This will surely sound unbelievable after my rant, but some sick part of me actually wanted to pick up the next book and see what happens next. 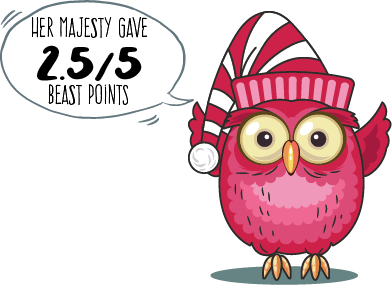