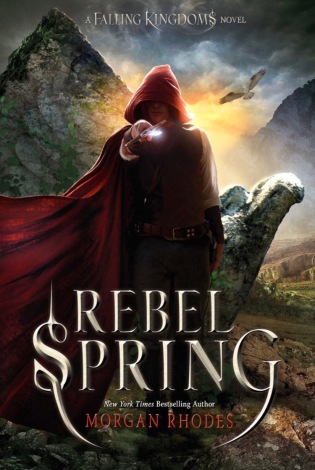 Cleo is now a prisoner in her own palace, forced to be an ambassador for Mytica as the evil King Gaius lies to her people.

Magnus stands to eventually inherit the new kingdom but is still obsessed with his feelings for his adopted sister, Lucia.

Lucia is haunted by the outcome of the breathtaking display of magic that allowed her father to capture the kingdoms.

Jonas watched at the palace gates a troop of rebels behind him, waiting for him to tell them how he plans to overtake King Gaius.

After a bloody siege, Auranos has been defeated, its young queen orphaned and dethroned. The three kingdoms—Auranos, Limeros, and Paelsia—are now unwillingly united as one country called Mytica. But the allure of ancient, dangerous magic beckons still, and with it the chance to rule not just Mytica, but the whole world over…

At the heart of the fray are four brave young people grappling for that magic and the power it promises. For Cleo, the magic would enable her to reclaim her royal seat. In Jonas’s hands, it frees his nation, and in Lucia’s, it fulfills the ancient prophecy of her destiny. And if the magic were Magnus’s, he would finally prove his worth in the eyes of his cruel and scheming father, King Gaius, who rules Mytica with a punishing hand.

When Gaius begins to build a road into the Forbidden Mountains to physically link all of Mytica, he sparks a long-smoking fire in the hearts of the people that will forever change the face of this land. For Gaius’s road is paved with blood, and its construction will have cosmic consequences.

This series is still a long way from getting a five star rating from me. But compared to Falling Kingdoms, this is actually better. The first half of the book was pretty much uneventful. The second half is where it picked up pace. The characters—some of them at least—are starting to gain some layer, there’s more action, more deaths, and more players in the race to find the Kindred. Adding more thrill to this is the fact that none of these players are truly ahead of the others in this quest. They all possess different significant pieces that leads them to the Kindred—from simple knowledge, to family heirlooms, to strange immortal friends—and they’re all equally close to finding it. And then there’s those who believe that the Kindred is better lost than found and are ready to put on a fight to keep anyone from finding it.

I’m pleased that Rhodes extends her world to neighboring empires known to be even more powerful than Mytica. Although the world-building is still lame, to be honest. We’re still stuck with the very basic descriptions: Limeros—the land of ice and snow, Paelsia—the impoverished land that’s slowly wasting away and also Mytica’s source of excellent wine, Auranos—the land of sunshine, warmth, and green hills. And now we have the Kraeshian empire—it’s huge and it’s got a powerful ruler. And that’s it. No mention of customs or traditions that makes these kingdoms different from each other. Limerians and Auranians have opposing beliefs about the goddesses Valoria and Cleiona as mentioned in the first book. I was hoping to hear more of it here but sadly that part wasn’t touched again.

“I believe we make our own destinies, every last one of us. Who leads us makes no difference.”

This book offers more POVs than its predecessor. We get point of views from heroes and villains alike. We see more involvement from the Watchers, even those who were stuck in the Sanctuary. And we have new characters. There’s Lysandra, who is pretty skilled with a bow, who can handle herself, and certainly doesn’t need saving. Sounds badass. Although pretty common, too. But, whatever, she’s useful.

Since we’re speaking of our character’s usefulness, Cleo remains useless in this book. Apart from that tiny hint of growth towards the end of the book, she’d absolutely done nothing pivotal. She’s still the same damsel in effing distress, waiting for someone to save her from the heavy situation she’s in. And why is every dude in Mytica smitten with her? The guard, the squire, the rebel, the prince, even the idiots like Aron! The guys seem to have a habit of kissing Cleo without her permission. And Cleo have the habit of just melting into the kiss every damn time, and then, bam, she’s developed some sort of romantic feelings towards her kisser. I love romance in my books but this is just too much. Even for me. And Cleo isn’t even that special.

“Evil is a choice one makes, not a natural state of being.”

And Lucia? The first sorceress born after a thousand years is just as useless in this book. Bearing the title of sorceress, I was expecting a lot more from Lucia. But she spent so much time sleeping and dreaming than actually being a sorceress. It was boring. A lot of blood is being spilled all across Mytica—one of the characters that I find likable even died with a sword to his heart—and yet Lucia mourns because she has killed a rabbit!

Most of the action—which I am grateful for—involves Jonas. As a rebel, he has been busy causing problems for the new king, Gaius. Although I must admit, every time Jonas has a plan, I feel like telling everyone to count themselves out. The guy could have slit some throats, be done with their mission, and walk away victorious. But no. He always feels like talking to his enemies first, let them know how much he hates them and all that shit, giving up what small advantage they have, leaving a lot of his rebels killed.

Sometimes, to regain sanity, one had to acknowledge and embrace the madness.

Magnus though, has become someone worth watching out for in the next releases. He has become more than just the prince who was in love with his adopted sister. We saw flashes of his past, his weakness, his innocence, and self-doubt. But we also saw him make firm decisions on his own. Though there’s conflict within himself, he is gradually changing into someone better. He’s no longer the son who is ready to take the road that his father has paved. Instead, he’s starting to make a path of his own.

Even the coldest hate can shift into something warmer if given enough time, just as an ugly caterpillar can turn into a beautiful butterfly.

I’m still not buying any of the romance. I hate that Rhodes has to pair everyone up. The instalove is everywhere. One moment the characters were just talking, and the next, bam, they’re kissing! Like, where did all these feelings came from? But at least there was enough intrigue and thrill to keep my attention away from all the romance. There were certainly a bit of enjoyable scenes particularly in the second half of the book. It’s just that, it doesn’t seem to have a solid hold on the more interesting things. There are moments where it picks up pace and start to hook me in, only to drop everything later in the next chapter.

In the end, this was an improvement. Thankfully. The characters aren’t as fully developed as I have hoped for but they’re learning how to play the game. I hope to see some hardcore revenge plots in the next installments. Although, with this series, I have learned to lower my expectations. 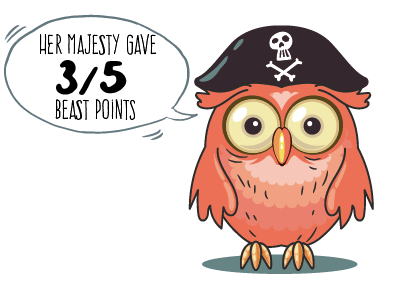