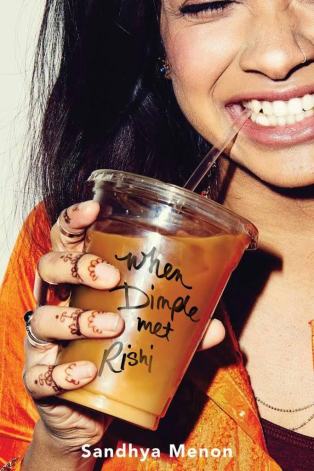 The rom-com that everyone’s talking about! Eleanor & Park meets Bollywood in this hilarious and heartfelt novel about two Indian-American teens whose parents conspire to arrange their marriage.

Dimple Shah has it all figured out. With graduation behind her, she’s more than ready for a break from her family, from Mamma’s inexplicable obsession with her finding the “Ideal Indian Husband.” Ugh. Dimple knows they must respect her principles on some level, though. If they truly believed she needed a husband right now, they wouldn’t have paid for her to attend a summer program for aspiring web developers…right?

Rishi Patel is a hopeless romantic. So when his parents tell him that his future wife will be attending the same summer program as him—wherein he’ll have to woo her—he’s totally on board. Because as silly as it sounds to most people in his life, Rishi wants to be arranged, believes in the power of tradition, stability, and being a part of something much bigger than himself.

The Shahs and Patels didn’t mean to start turning the wheels on this “suggested arrangement” so early in their children’s lives, but when they noticed them both gravitate toward the same summer program, they figured, Why not?

Dimple and Rishi may think they have each other figured out. But when opposites clash, love works hard to prove itself in the most unexpected ways.

Let me summarize my experience with this book in a few words. This book was like looking at a fancy cake you’ve been waiting to devour for days. And when you finally get to eat it, you find that the cake’s base was tasteless and the frosting was too sweet that it makes you want to gag. But you eat it anyway because you effing paid for it!

I could end my review right there but I was way too disappointed with this book that I couldn’t just keep quiet. I thought this was going to be an amazing read—like, off the charts kind of amazing—given its catchy premise and all those four and five star ratings. But my feelings for this book quickly changed from intrigued to disinterested until I finally don’t care.

The representation of some of the Indian traditions was the only thing that’s noteworthy about this book and one that I really appreciate. We don’t usually get Indian leads in this genre so this book was somewhat refreshing in a way. I may have huge issues here but I love how the author used this book as a platform where she introduced Indian culture to the world through its readers. Not only that, this also promotes their language as the characters sometimes switches from English to their native tongue. I can see how proud the author is of her roots!

Moving on to the ugly part—the rant.

Perhaps, if I am a thirteen year old I’d love this for all its fluffiness. The younger me would probably squeal in delight and cheer for Dimple and Rishi. But right now all I see is the lack of plot and too much bullshit. By that I mean, there’s a large dose of poorly handled cliché in this book. The mean girl cliché being the strongest. Followed closely by the rich-dumb-boys trope. And then there’s the protagonist—Dimple Shah—who is so different from other girls. Well, we all know the drill with these kind of characters.

“This is our life. We get to decide the rules. We get to say what goes and what stays, what matters and what doesn’t.”

The first three chapters of the book were actually interesting. I even liked Dimple in those chapters. It was a struggle not to rush through the pages so I could get to the part where she and Rishi meet, the part where Dimple would unleash her badass coding skills and impress every genius at Insomnia Con, and the part where I would melt with the romance. But all my excitement died right after Dimple met Rishi. The moment the romance came into play, things got into a bad turn, for me. It felt like the author suddenly decided to pour all her focus into having Dimple and Rishi together. Everything else was forgotten—the Insomnia Con, the App that Dimple and Rishi was supposed to develop, the fact that they’re competing for a prize that means the world to Dimple! We didn’t even see the two of them spending much time on developing the App because their trips from one fancy restaurant to another and “non-date” dates had taken most of the space in the book. It’s like being told that there’s a project, and they’re working on it, and it’s going to blow minds, and I’m just supposed to believe it even though I haven’t seen it!

I don’t really have a problem with Dimple and Rishi always going out. I just hate to see such a good potential go to waste because Menon could have used their team-up at Insomnia Con to let us know her characters better. I would’ve love to see Dimple’s and Rishi’s disagreements regarding their project, how their relationship would fair under the pressure, and how they’d handle it. But no! Instead of giving us some techy vibes, the book suddenly throws a talent show that has nothing to do with web developing. To me it was yet another poor excuse so Dimple and Rishi may have more alone-time together.

My biggest problem here sits with Dimple. I like that she knows what she wants and that she can’t be forced to do something she doesn’t want for herself. But not even halfway through the book Dimple changed into this rude, whiny, and judgy character. What grates on my nerves is her indecisiveness. It’s pretty clear how opposed Dimple is to the idea of an arranged marriage with Rishi. And yet the next thing you know is they’re sharing a kiss that Dimple herself initiated. A couple of chapters later she is talking Rishi into having sex with her. (*insert biggest eye-roll here*) Where’s the sense in that? I mean, girl, what do you really want?

It’s so irritating how Dimple makes big problems out of simple things. She wants me to believe that it’s really difficult to choose between pursuing her dreams and having a serious relationship with Rishi. I just couldn’t understand her dilemma. Who says you can’t be a successful career woman if you’re in a relationship? I don’t see how being with Rishi could thwart her goals when he’s nothing but supportive! I love drama. Just not this kind.

The side characters were no better. The plot line with Celia was underdeveloped. It suddenly pops out of nowhere and disappears just as quickly. It would’ve been a good subplot if it was given enough attention but instead it just felt like an unnecessary addition to stretch the story further.

I truly wish I enjoyed this more but there was nothing impressive in this book. So much potential wasted, I’d say. The story changed from good to boring. The characters changed from pleasing to irritating. What could have been a cute and fluffy romance turned out to be a huge bag of cheese. I didn’t like this book. I didn’t hate this either. It’s because I couldn’t find the part in me that cares about anything that could happen in this book. No book has ever made me so unfeeling!

These are just my opinion though. Turns out that this wasn’t exactly my cup of tea but maybe it’s yours? Don’t let this review stop you from reading this book if you really want to.